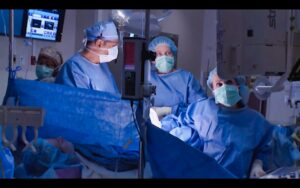 Congenital diaphragmatic hernia (CDH) is a sporadic birth defect that occurs in approximately 1 in 3,000 pregnancies. The diaphragm is a muscle that separates the abdomen from the chest. The pressure in the abdomen is greater than the pressure in the chest. When the diaphragm does not form or does not form properly, leaving a gap, the pressure in the abdomen pushes the stomach, bowel and other organs into the chest. The abdominal organs occupying the chest compress the lungs and do not allow the lungs to develop properly. This is called pulmonary hypoplasia, or lack of lung development. In addition, the arteries within the lungs become thickened, increasing the blood pressure within the lungs, a condition called pulmonary hypertension.

Treatment of CDH before birth (antenatal) has been tried in several different ways to try to avoid death or long-term complications after birth. The first attempts were done by repairing the hernia while the baby was still in the womb, using open fetal surgery.That approach was abandoned, both from significant maternal complications as well as from lack of improved outcomes over expectant management.

Quintero and collaborators showed that it is possible to enter the airway of the fetus without having to open the abdomen or the uterus (percutaneous approach) to block the fetal airway with a special device. Because the blockage is done from within the airway, it was called “intraluminal”, as opposed to blockage from outside the airway (for example, by tying off the airway). If lung development is achieved, the tracheal occlusion device is removed at the time of birth and the baby undergoes correction of the hernia after birth.

Currently, several centers worldwide are offering intraluminal fetal TO for the antenatal treatment of CDH. Most centers are using a detachable balloon and are reporting approximately 50% survival in severe CDH cases (the ones that otherwise theoretically would have died). Our center offers a different technique involving the placement of a covered stent, which meets all of the requirements for the surgery. Using such technique, our current survival rates are approximately 85%.

How can one predict which fetuses will do well without antenatal treatment and which would not, and therefore would potentially benefit from tracheal occlusion?

If the compression of the fetal lungs is not severe, such that the lung size is preserved, those babies are likely to do well and do not need antenatal surgery. To gauge if the size of the lungs is small, which would justify antenatal treatment, researchers have proposed different ultrasound formulas:

A) Lung-to-head ratio (LHR). The LHR is calculated by dividing the area of the fetal lung at the level of the heart (LA) by the circumference of the fetal head (HC): LHR = LA/HC. The reason researchers proposed dividing the LA by the HC was to use an internal ultrasound parameter (HC) that would adjust for gestational age. A value of the LHR of <1.4, later changed to <1.0, was considered low and those babies would be offered antenatal treatment.

Unfortunately, the LHR has been shown not to be independent of gestational age. As a result, fetuses with the same value of LHR but measured at different gestational age, have different prognoses (the earlier the measurement in pregnancy, the better the prognosis). As such, the LHR should not be used to assess fetuses at risk for pulmonary hypoplasia from CDH.

B) Observed vs. Expected LHR (o/e LHR). To correct for the lack of independence between the LHR and gestational age, some investigators proposed using a ratio between the observed value of the LHR with what it was supposed to be according to the gestational age. This new ultrasound parameter was called the observed vs. expected LHR, or o/e LHR. Different cut-offs of the o/e LHR have been used to predict fetuses with small lungs: <25% (severe), <35% or <45% with liver in the chest (moderate).

C) Quantitative Lung Index (QLI). Quintero and colleagues noted that the LHR is not a true ratio, but rather a function. Indeed, the area of the lung is measured in mm^2, whereas the head circumference is measured in mm. Therefore, the division of mm^2 by mm results in mm, and not in a number without units of measurement. This mathematical detail explains why neither the LHR nor the o/e LHR are independent of gestational age. Quintero and colleagues thus proposed a new formula derived from over 34 million permutations of lung and head sizes, which does produce a ratio free of units of measurements and independent of gestational age.

The index is called the “Quantitative Lung Index”, or QLI. The QLI for the right lung is calculated by dividing the lung area (LA) by the square of the head circumference (HC^2) and multiplied by 100. A QLI of 1.0 is at the 50th percentile for lung growth. In fetuses with left-sided CDH, a right-lung QLI <0.6 is at the 0.1st percentile and is presumed to predict a small lung.

Because the QLI is independent of the gestational age, it can be measured at any point in pregnancy between 16-32 weeks. Thus, patients can be categorized as low risk or high risk in the second trimester, with enough time to make preparations for antenatal surgery, if warranted. Our group currently uses a value of the QLI of <0.6 as the cut-off to offer antenatal therapy for patients with left-sided CDH. Patients with right-sided CDH require the use of a different formula, which has been submitted for publication. The cut-off value of the QLI for patients with right-sided CDH is <0.5.